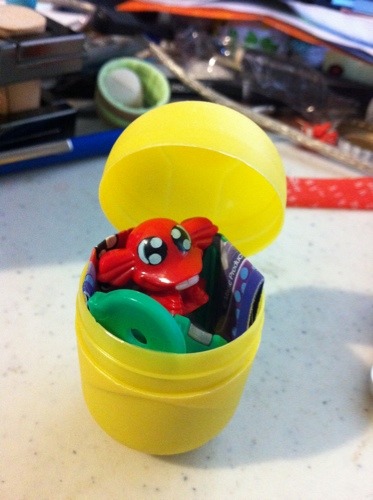 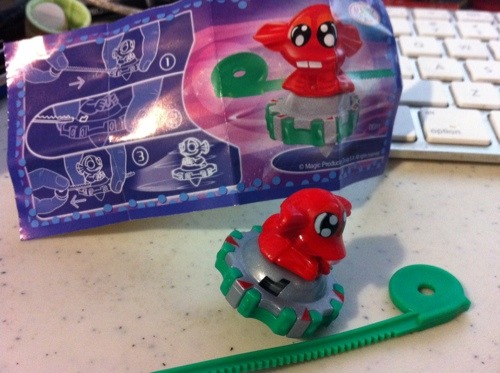 Crap. I forgot to post yesterday. I had this guy already open, too, I just got distracted and forgot to actually write it up. This is what Minecraft does to you, kids. This is what spending all your time building miles-long underwater glass subway tunnels does to your time.

We have here a top. It’s not a great top. It’s not as bad as the last one, although it took me some experimentation to get it to work at all. (I kind of wish I hadn’t figured it out, because “This fucking thing doesn’t even work!” makes for a better review. But probably one of you would have seen them before, and then I’d look like a retard.)

See, it’s the sort of top where a ripcord imparts torque to the device, giving you more spin than you can get by twisting it between your fingers. It doesn’t have a lot of weight, though — Beyblades work the same way, I believe, but are made of metal because you want more weight in the disk, for better gyroscopic force. But this one is just plastic, so it’s too light. If you yank the cord and quickly drop or place the top on your table, the bounce, or tilt as you place it, or whatever, is too much and it instantly falls over and grinds across the surface for a second before stopping.

But, if you put it on the table first and hold it upright while you pull the cord, and then just let go, it’s okay. Not amazing, but as good as you could expect from a Kinder Egg top.

So, it’s an alright thing. I still don’t like it as much as the older eggs, because it doesn’t have all the parts to assemble. Also, it’s too… modern, you know? It’s too obviously a Beyblade ripoff, the plastic is too shiny, it stinks of “Wooooo look at us, this shit is NEW baby, these ain’t your grandpa’s Kinder Eggs! Radical!”

The subtext, of course, is “These ain’t your Grandpa’s Kinder Eggs because the old crew put a lot of thought into those and made them really high-quality, and quality costs money.”