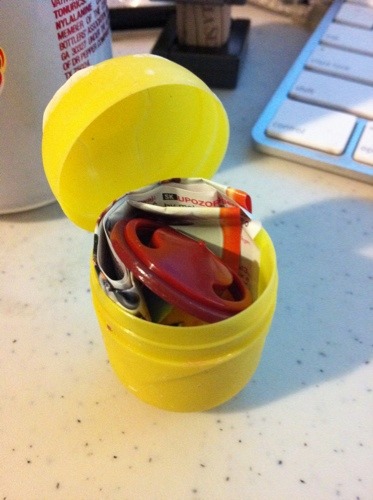 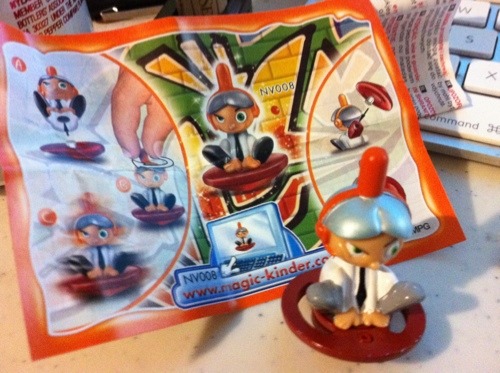 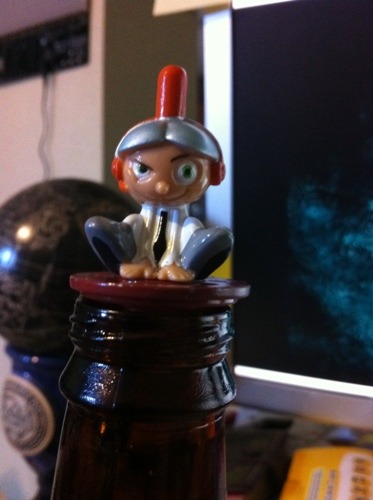 Sometime it seems like for every good thing the Kinder Egg people come up with, there are ten abject failures.

I know they have good intentions. You can’t manufacture toys with bad intentions, right? No toymaker says “I fucking hate kids, what sort of toy could I give them that would crush their spirits?” So what’s the thought process? “Let’s start with a top. A good ol’ spinning top. That’s a perennial favorite, right? Classic. Those Beyblade things are basically tops, and they’re a hit right now.” That’s a perfectly good start. And someone else says “Let’s make them into fun characters! A person or animal or something, sitting on the top.” Good intentions, sure. But then the project gets handed off to some designer, who is instructed to make up the characters. Except, he hasn’t actually watched any recent popular kids’ cartoons, and only has vague memories of what cartoons were like when he was watching them in the 80’s. Except what he’s really remembering are commericals for Fruit Roll-Ups and Kool-Aid. So what he comes up with is a crew of “radical” “awesome” future kids zooming around on their “totally sweet” hover-disk gadgets. One of them — this particular one — happens to look like the worst sneering douchebag you’ve ever seen, because there’s an extremely fine line between “radical dude” and “arrogant fuckpole”, and the artist is not quite good enough to land on the right side of it. After all, he works for Kinder Eggs. He’s only like one rung above the guys who draw mazes for the backs of cereal boxes. He gives the character designs to another guy, who is in charge of actually modelling the things. This guy realizes that you need a stick of some sort poking out of the top of the top, to spin it with. So, he slaps a peg on there, and now our radical assbag has a penis sticking out the top of his head.  What the modeller fails to realize, is that a top does not work unless it is finely balanced. These chunky plastic figurines are, naturally, not balanced in the slightest, and therefore they do not actually spin. Result: an unattractive leering penisheaded fuckwit sitting on a top which does not at all function as a top. Way to go, Kinder Eggs.