I’ve been talking a lot about how I don’t think the new Kinder Egg designers understand what “fun” is. I don’t have the presumption that any of them will ever read this, but I got to thinking about what actually makes a thing fun or not. Certainly, ‘fun’ is largely a matter of personal taste, but I do think there are a few points that most people could agree on.

1. A thing you put together is more fun than a thing that comes pre-assembled (or that is a single object.) More parts and more intricate construction = more fun. 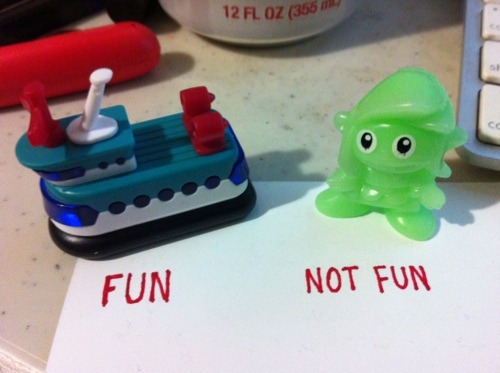 2. A thing with the potential for imaginative play is more fun than a thing that provides its own limited action. Imagination is infinite; a one-trick pony is just that.

4. A thing that fails at its own stated purpose is not fun.

5. A 15-piece cardstock jigsaw puzzle is not fun.

If you’ve been following this project for a while, I bet you can spot which of these toys came from the new-style Kinder Eggs, and which ones didn’t. If you’re a new arrival, I bet you can still guess.