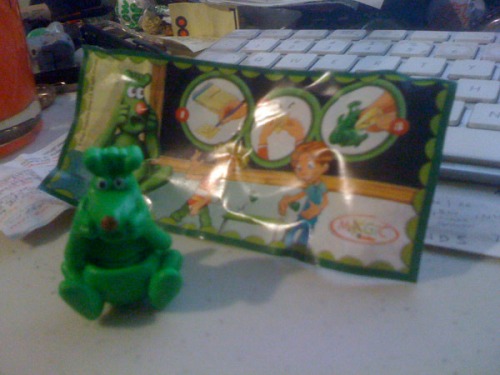 The South Australian messengeroo is a curious and repulsive little creature. Despite its name, it is not related to the kangaroo — it is in fact a small green grub-like creature, made all the more disgusting by its nearly-human facial features and hands, and its tendancy to wail horribly. It has a pocket on the front like a kangaroo, presumably for similar purposes, but no one has studied them closely enough to find out for sure.

It is referred to as a ‘messengeroo’ because children in the (fairly small) region of Australia that the creature is native to enjoyed a brief fad of passing notes to each other in classes by stuffing folded-up papers into the grub’s pocket, and bouncing it at each other across the floor like a rubber ball. It is unknown why they did this, because although the creature’s flesh seems hard and rubbery like a superball, it actually has very little elasticity, and does not bounce worth a damn. Even if it did, the grub’s flailing arms would make it impossible to bounce accurately, and what’s more, the loud ‘thwock’ noise would be sure to alert and annoy teachers.

What an amazingly useless thing.