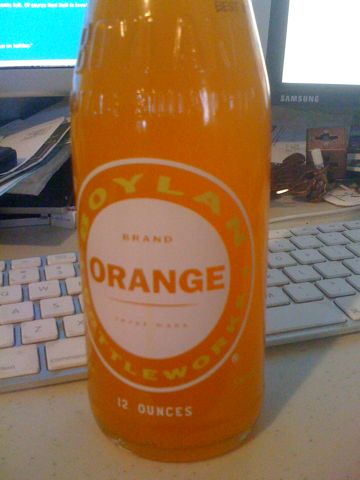 Jenni and I went to Pop the Soda Shop the other day, and I picked up a few odd-looking things to review here, like I did ages ago. Except this time, I also got a half a dozen different orange sodas.

So I figure I’ll work my way through the orange sodas that Pop Soda has to offer and see what’s best. I got a half-dozen different ones this time, and I figure I can get a different half-dozen next time, and we’ll pit them against each other, tournament style.

Anyway, it’s a nice bottle. Pleasantly understated, and a painted label (which is nice) but *also* the bas-relief, which is even classier. On the back, it says “Registered 1891” — historical! and “Best by 20 MAR 10”… well, goddammit! I missed by three days!

Oh well, it can’t have gone that far off in just three days.

Can we open it now? I’m thirsty.

Smells… peppery? Okay, well, my sense of smell has never been much to brag about, but…

Tastes… well, it’s not very orangey, though on the other hand it’s not overly sweet, which is nice.

Also, it has a distinct flavor of fresh ground black pepper. What the hell? I mean, I like black pepper. I like it a lot more than most people. But there’s a time and a place for everything, right? I don’t pour orange juice into my macaroni & cheese, and I don’t expect to taste pepper in my orange soda.

I don’t see “pepper” in the ingredients list. What does ester gum taste like? Does it turn into pepper three days after manufacturing?

Verdict. Between ‘blah’ and ‘ehn’.