So I mentioned that ComicZeal iPhone app recently, the comic book e-reader thing. I’ve been reading a lot of manga on it, and a lot of it is fan-translated stuff. For the most part, it’s okay. Generally could use some more careful proofreading, but apart from some truly execrable volumes of the One Piece manga (which were so poorly translated I gave up in disgust), the fan-translated stuff I’ve been reading has been pretty reasonable — even excellent, in some cases.

And then I ran into this one volume (hopefully one volume, I’m going to be pissed as hell if the entire rest of the set is like this) of Rurouni Kenshin, in which the fan-translators have made possibly the most stupid decision I’ve ever seen: to cover up the art for the Japanese sound effects with larger, translated versions. It made me so angry, I hunted down raw untranslated scans so that I could post a representative sample.

Well done, translation team, whoever you are. Cover up the entire panel with a gigantic WAK SHAM, so that I know what sound it makes when… um… well, when whatever is happening in that panel happens. That’s obviously much more informative than being able to actually see the action and infer the sound from fucking context, isn’t it? 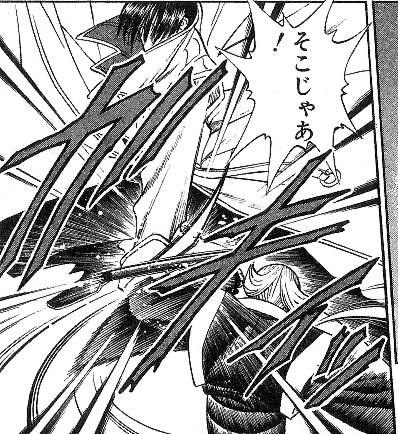 Oh! The old dude parried the younger dude’s sword blow with his police-baton thing. See, now that I know what’s going on, I think I can guess for myself what it fucking sounds like.

Not only is this utterly retarded, it’s also extremely disrespectful of the original artist. Nobuhiro Watsuki (the original artist in question) obviously put some thought into the way this panel looks. Notice how the katakana frame the impact of the two weapons in the center of the panel, focusing your attention to that point without obscuring the characters’ heads or bodies, so you get the full sensation of movement.

But no, the people who translated this (and I don’t have enough respect for them to actually look up their names) thought it was more important to fill the panel up with WAK SHAM.

Don’t even get me started on the absolutely shitty bitmapped font they’ve used for the dialogue.