So Evan Parker was doing a series on his blog about these tradable miniatures wargame cars things. I guess he had a pack left after he decided he was done with it, because he sent them to me. Thanks, Evan! I actually got it about a week ago, and it’s been sitting here on my desk waiting for me to post about it. Evan was probably wondering if they got lost in the mail, or what. Sorry, Evan!

The back of the pack says “Racer Knights of Falconus is a constructible… eh, I’m not gonna type it all out. But I guess you’re Knights at Falconus Academy, and what you do at this Academy is build warcars and shoot your fellow students in a death arena. Man, what is higher education coming to?

Jesus look at all this stuff in here. I should’ve put a quarter or something in for scale, but those cards are about a quarter-inch wider than a credit card, if that helps.

Also, what is up with my phone camera? That weird green in the middle and pink on the outside color thing? Man, I think I maybe fucked it up taking photos out in the sun at the Grand Canyon or something. :( :( :(

The character I got is named Vermilion, and she is a hippie seer. She’s cute, I guess. Man I am sick of elves with bunny ears though. Look, fantasy artists, cut that shit out. It looks stupid. Plus there would have to be a bone in there to keep that cartilage from drooping like a basset hound. If she shook her head ‘no’, her ears would smack her in the eyeballs.

At least she doesn’t have bone-in eyebrows like the World of Warcraft elves. 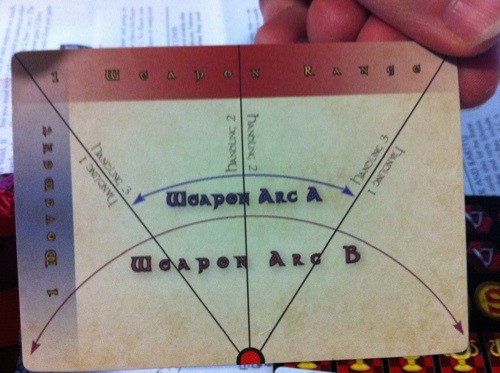 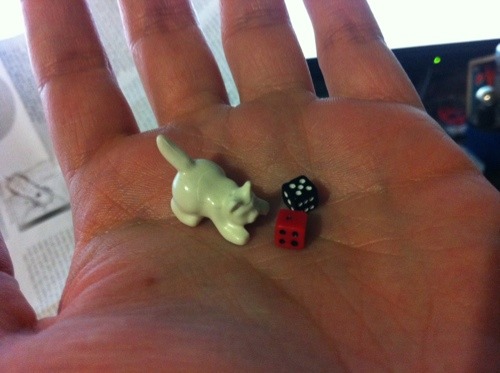 You know what’s fun? Using a thing to add scale in a photograph, when it’s not clear how big that thing is either. I should’ve taken this photo on the desk instead of my hand. I also need a giant novelty quarter. 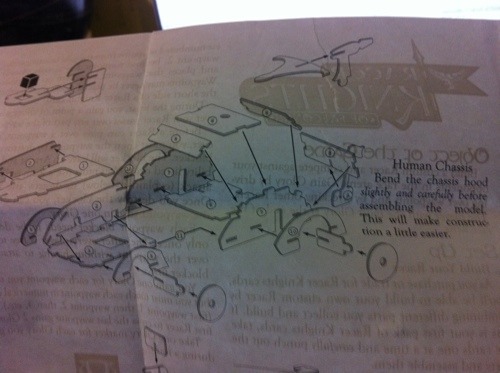 Okay, time to assemble the… jesus christ. Do I need an IKEA wrench for this? 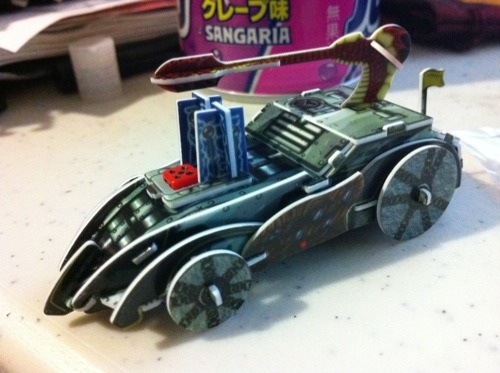 Pretty badass. And big! And complicated! I had a few of a similar product that was punch-out plastic pirate ships, but they weren’t nearly as elaborate and interesting as these cars. Also the gun and engine and wheels are easily removable for reconfiguration, which is awesome.

My first foray into wargaming was with Warhammer 40k Epic Scale. I think I played it twice ever. I was mainly interested because the war Titan models all had removable and interchangeable weapons. Fucking A. More recently I bought a boardgame called Grind for exactly the same reason. Still haven’t played it. 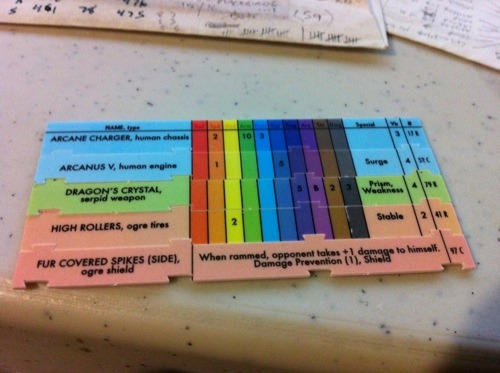 Here are my stats! I don’t know what they mean, except that apparently my wheels, weapon, and chassis are all rare. Lucky!

So yeah! There’s that! Thanks again, Evan! If anyone else has stuff you want to send me so I maybe write a blog post about (if it’s awesome — no promises) I guess you can send it to the Video Games Hot Dog P.O. Box? I don’t know what that address is offhand, but you can listen to the podcast to find out. Address it to “Video Games Hot Dog, attn: Riff”, I guess?

Man I am kind of bummed about my phone camera. Do you think my warranty covers solar burn-in?

3 thoughts on “Racer Knights (of Falconus)!”