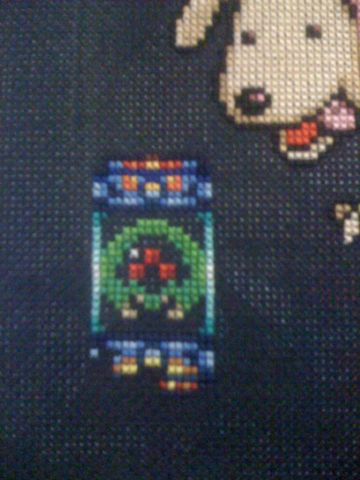 Meanwhile, back at the other thing I post about, we have this little guy.

I hope to god you know who this is, but just in case: it’s the baby metroid from Super Metroid. Actually, he’s more properly “from” Metroid 2, because that where he originates, but since Metroid 2 was on the original monochrome Gameboy and Super Metroid was on the Super Nintendo, you get one guess as to which game is well-known and which is an obscure bit of trivia.

I didn’t have a Super Nintendo growing up, and didn’t play Super Metroid until emulators happened, much much later… but I did have a Gameboy, and let me tell you, I played the living fuck out of Metroid 2. At the end of the game, having basically genocided all the metroids on their planet of origin (not a difficult task, since the entire species had about forty members, all living in one small cavern about the size of The Mall of America), Samus encounters one last unhatched metroid egg. Naturally, it hatches, thinks Samus is its mother, and playfully orbits you, making adorable chirping noises and eating pathway-blocking rubble as you stroll through the last bit of cavern and back to your ship. And I mean ‘stroll’ literally — there were no enemies, and no timer. It’s the only Metroid game where killing the final boss doesn’t lead to a desperate sprint to get off the planet before everything turns into explosions.

Over the course of my many, many playthroughs, I gained quite an attachment to this little fella, which made the story of Super Metroid particularly meaningful to me, when I finally got around to playing it. I don’t want to spoil it for you, but spoilers: he dies. I was so sad, you guys.